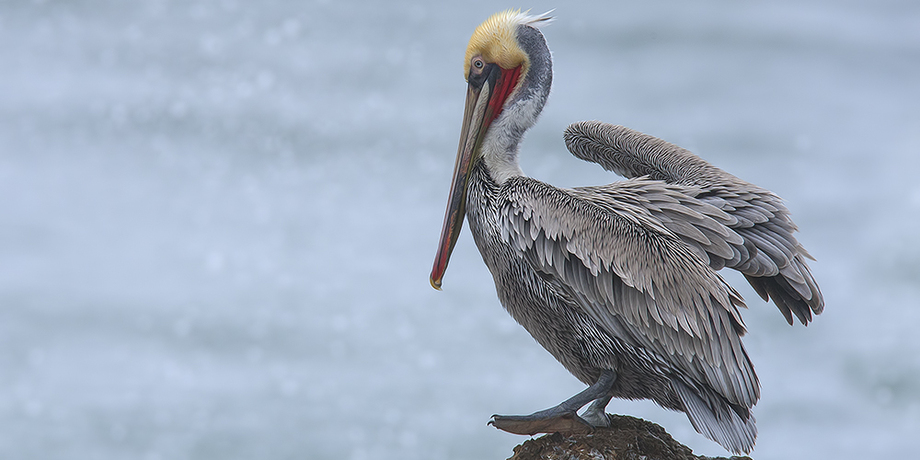 This is a great area simply because you have public access to six excellent wildlife locations centered within the Huntington Beach and San Diego urban areas. All are well organized and prolific between December and January. Although the major attraction is the breeding Pacific Brown Pelican, opportunities abound to capture a myriad of shore birds or simply practise flight shots.

We visited Huntington Beach first, camping at the Huntington By The Sea RV Resort. The centerpiece for this location is the Bolsa Chica Ecological Reserve. Although it is a large area with an excellent system of trails, we tended to stay close to the walkway shown above since carrying heavy equipment for long distances can be quite an onerous task. This is an early morning site and provides a significant variety of birds if you are patient. It is definitely a great place to meet other photographers. We generally pack up and head to the Upper Huntington Bay Ecological Reserve by ten o'clock, especially if the tide is coming in. There is a fresh water inlet next to the main parking lot where birds congregate to drink and rest. Directly across is a sandy beach that attracts quite a variety of shore birds. In the later afternoon, a good place to practise flight shots is the City Pier as Western Gull or Heermann's Gull constantly mooch scraps from the fisherman. If you want a change, another good late afternoon or evening location is the San Joaquin Wildlife Sanctuary. Again, it sports endless trails but we liked to sit at Pool 1 and take advantage of the evening light. It's a great place for Black-Necked Stilt. All the above sites require a longer lens, a good choice being 500mm with a 1.4X extender (the exception is the Pier where a 70-200mm is more than adequate with a flash extender for fill). The results of our visit to this area can be seen in Gallery 20.

It's now less than three hours to get settled in the San Diego area. As this is a bustling urban center where traffic noise seems to infest every camping location, we would suggest that you try the RV site at Santee Lakes as it is quiet and provides easy access via Highway 52 to the La Jolla area where all the action is at. It's best to be at the Cove Cliffs by day break as parking can be problematic (the upper hill provides free three hour parking which is more than enough time for this site).

You will see a wooden viewing platform from the road (not shown in the upper right of the above picture). This is bypassed by most photographers who generally move down on the upper cliff to position for behavior or portrait shots. Moving lower provides great access for flight shots as the birds return from feeding to preen and rest. As it can become quite cramped, we generally go with a mission in mind and position accordingly. However, wind, light and the physical number of birds will dictate what you can achieve so be prepared to change your plan. The rules for access may also have changed since our last visit to the Cove Cliffs as it is a popular photography location. Although we viewed the large number of users as verging on intrusive, the birds seemed accustomed to human traffic and preened or slept quite contently.

As you are on the outskirts of the San Diego La Jolla Underwater Park (actually an ecological reserve), we recommend walking to the Children's Pool to spend some time trying to photograph Harbour Seal as they return in the surf after feeding to bask in the sand.

An good afternoon site is at nearby La Jolla Shores Beach. You need a low tide and somewhat overcast conditions for good results. Parking is free at the public beach. We walk toward the Scripps Institute Of Oceanography (you can't miss their pier) and continue across the rocks to the next bay. The shore birds here are easy to approach as they are used to the crowds that walk the beach.

A great alternate afternoon location for ducks is the Santee Lakes Recreation Preserve, especially on the west side of Lake 5. It's best to buy a twenty pound bag of "scratch" from a pet food store for bait. We would sit at the waters edge and wait for ducks to be attracted to feeders on the the opposite shore. As they finished, simply throwing a little seed in the air was enough to bring a deluge across to our position. This is great fun and affords ample opportunity to practise flight shots on birds that would otherwise be more difficult to photograph such as Wood Duck, Ring-Necked Duck and American Widgeon. You can see the results of our visit to this area in Gallery 21.

There are many good locations on the central coast of California also. We began by exploring the Monterey Peninsula, starting near Morro Bay. The major attraction was a Northern Elephant Seal colony that sets up house between early December and late February at Point Piedras Blancas near San Simeon. Viewing is either from a boardwalk with docents present to supervise and answer your questions or from several Vista Points along the highway. It’s great fun to try and capture images of the newborn "pups" or maturing “weaners” as they suckle, squawk and joust for position along the beach. Alpha males fight for dominance and are the centerpiece of the mating ritual. We arrived in the middle of February when fewer animals were present but the opportunity to isolate individuals was slightly easier. You’ll need to plan several days as the weather can be erratic. We encountered some early morning rain and fog. You will also need a fair amount of patience. It's not easy to isolate a clean (not covered with sand) animal as they are either sleeping or roaring at each other, mostly over territory. The best activity is in the early morning when the males return from feeding and joust for position on the beach (mating was mostly over so they have stopped fasting and returned to a regular feeding pattern). Keep an eye out for large rocks in the ocean at the Vista Points as they are great roosts for Pacific Brown Pelican and Double-Crested Cormorant. We were on site by sunrise and finished by noon when we looked for shorebirds and other opportunities along the southern coast. The best place was the Morro Strand State Beach just past Old Creek as you enter Morro Bay. It’s a sure bet you will find Marbled Godwit and Whimbrel feeding in the late afternoon. We walked the surf in rubber boots and had great fun trying to capture them at eye level. Another good location is the Sweet Springs Nature Preserve in Los Osos. Here we found Great White Egret and Snowy Egret with fairly decent backdrops. The results from this area are posted in Gallery 53.

Our next stop was the Monterey Bay area. We started at Moss Landing. This is a great location as the sites we visited were relatively close together. It’s absolutely a haven for Sea Otter, Brant’s Cormorant, Western Grebe and Sea Lion. The best locations are Moss Landing State Beach on Jetty Road, the breakwater at the end of Sandholdt Road and the Yacht Club Marina just off Highway 1 on Moss Landing Road. We scouted recommended locations to the north, most notably Natural Bridges State Park (Santa Cruz) and Pillar Point Harbour (Half Moon Bay), but were disappointed as little bird life was evident. We also found locations such as Radio Road (Redwood City), Shoreline Lake (Mountain View), Coyote Hills Regional Park (Fremont) and the Don Edwards National Wildlife Refuge (Alviso) very urbanized, requiring a lot of long, slow drives due to the lack of nearby camping facilities. We've posted our output from this area in Gallery 54.

Our solution was to abandon bird and wildlife photography and try to capture the essence of the rugged San Mateo coastline. We started at the bluffs that overlook Whaler’s Cove next to the Pigeon Point Light Station and worked our way up the Cabrillo Highway to Half Moon Bay. The wave action on the rocks and tide pools can be very dramatic so you might also want to try some of the many roadside pull offs. This is also a great stretch of highway for Red-Tailed Hawk and White-Tailed Kite, so keep your long lens handy. You can see our attempts to capture the natural landscape of this coast in Gallery 60.