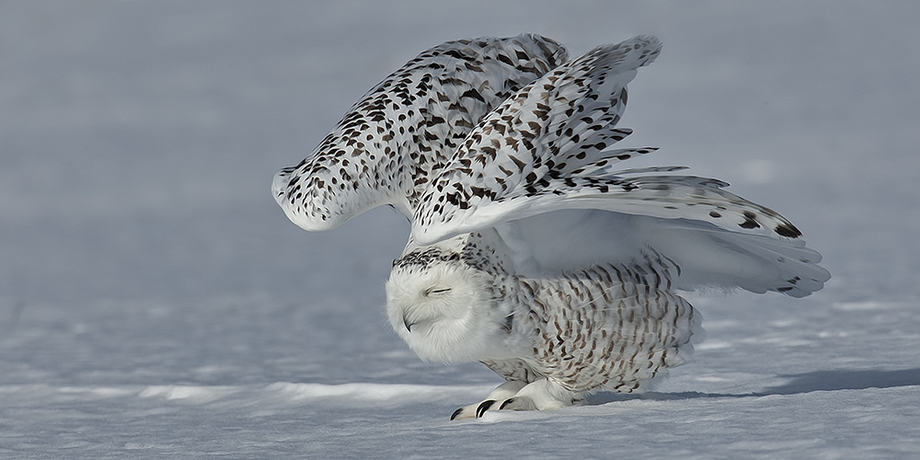 This area houses tremendous locations that contain target species that were of interest to us, namely Northern Gannet, Snowy Owl and Northern Hawk Owl. All are either difficult or down right impossible to view and photograph locally. Unfortunately, they all don’t show up at the same time.

Thousands of Northern Gannet migrate to Bonaventure Island in the picturesque Gaspe Peninsula to nest and reproduce during the summer months. The best time is late July and early August when the colony is alive with nesting, mating and feeding routines. Access is by ferry from Perce and requires a walk of approximately forty five minutes across the center of the island to reach the nesting site. 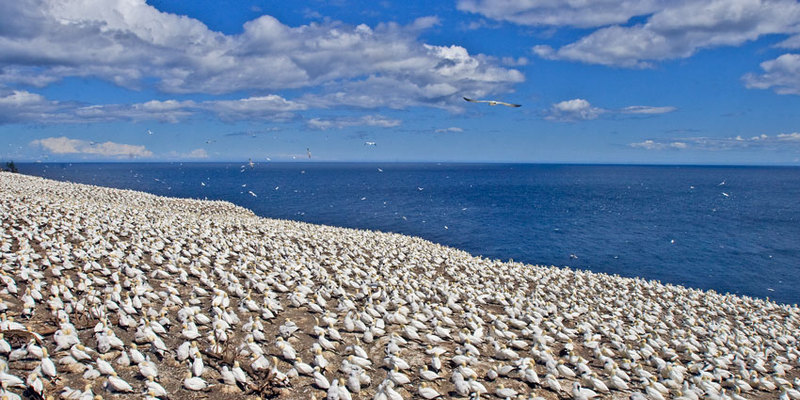 Park attendants are on site to answer your questions and ensure the viewing rules are enforced. As this is a cliff nesting site, the opportunities for flight and behaviour photography abound, all with superb backdrops. Try and isolate birds as they point skyward, signalling to their mate that they are about to take off and feed. The colony is noisy and very active. The pace is simply frenetic with limitless opportunities to capture flight images. It’s a location we highly recommend. You can view our images from this trip in Gallery 16.

The Snowy Owl prefers the cold climate of Canada’s northern tundra where it resides and feeds on Lemming and other small rodents during most of the year. Some will move south as the winter becomes harsh and food is harder to find. The outskirts of Ottawa and Montreal are a favourite destination as the corn fields are ideal for hunting voles. Winters here are not always kind and many birds die each year from malnutrition. Over the years, photographers have found that some birds can be approached and are receptive to feeding on live mice. This is an attraction technique known as “baiting” and can be a great venue for flight photography. There are several good workshops offered in both locations by individuals well versed in how to safely conduct a session with both Snowy Owl and Northern Hawk Owl subjects. The best time is late January to early February if the birds are present in numbers. Both the Snowy Owl and the Northern Hawk Owl are opportunists. The former will feed if hungry and the latter will always hunt as it “stashes” surplus prey in various hiding places for later consumption. Unfortunately, the practise of baiting is widespread and not always carried out with either respect for the subject or private property. We encountered unstructured groups of as many as forty photographers, surprisingly from all over the world, concentrating on one bird and rarely agreeing on how best to cooperate. We’d often find locations where trash was thoughtlessly left. It’s best to avoid these situations and photograph with an experienced guide who knows the area and understands the bird’s behaviour. The ethics of baiting can be endlessly debated but we feel it is an acceptable practise if executed in a safe and well structured manner. The results of our Montreal excursion can be seen in Gallery 52.

Experiencing and photographing the aurora borealis has been high on our bucket list for quite some time. Since 2014 was predicted to be a peak year, we decided to visit one of the few truly untrammeled locations in North America – the sub-arctic barrenlands of northern Canada – an area known for spectacular northern lights as well as wildlife viewing. There are many tours targeting exciting locations throughout the north. We choose one based in Kuujjuaq, northern Quebec that offered camps not only along the coastline of Ungava Bay for Musk- Ox (we stayed in a hut on a small island near the mouth of the Koksoak River in Dry Bay) but also inland for Barren-Ground Caribou (here we utilized an old hunting camp south of Tasiujaq on the Potier River near Finger Lake which targeted the Leaf River herd). Both locations offered prime aurora viewing in late August and early September. The herds were also in full winter pelage, fattening up as they prepare for winter and the approaching mating season. Unfortunately we were too early for the fall crimson and gold colors which are striking and make for colorful photography back drops.

The aurora borealis can be a challenging phenomenon to photograph. We used a Canon EF 16-35 f/2.8 L lens on an EOS 5D Mark III full frame camera body. We enabled the mirror lock feature, set white balance to K at a temperature of 5000 and placed the drive to one shot on a two second timer before shutter release. We pre-focused the lens at 16mm before dark to ensure any foreground objects or silhouettes would be sharp and noted the focus point on the distance meter. Night photography is a matter of the amount of ambient light that is available, such as how early the event occurs, what moon light is present and whether there are reflections off snow or water. For the nights that the weather cooperated, we encountered mostly darkness with slow moving aurora formations that displayed varying degrees of light intensity. We started to experiment at f/2.8 in manual mode using an ISO of 1600 with a 15 second exposure. It’s an iterative process and no absolute settings can be given as there are too many variables that must be dealt with. Simply stated, in the absence of ambient light, a higher ISO and longer shutter speed will be required for a wide-open f-stop. By reviewing the histogram, we simply changed our ISO and shutter speed until we got what we were looking for. We also tried stopping down slightly as it seemed to create a better image. The aurora we experienced certainly wasn’t anything near the images we’d seen from the Brooks Range in Alaska or locations in the Yukon. Although we encountered dark and often cloudy conditions, it was great fun. On one evening, we used a campfire to light the cliffs next to the location we had chosen. The effect produced an opportunity to experiment and come away with an assortment of images that would allow for some creativity while post-processing.

As for wildlife viewing, walking the barrens is quite the experience. The coastal terrain is markedly different from that found inland. It is moderately undulating, frost-shattered bedrock composed of gray and pink granite outcrops covered with black tripe and colorful star-burst lichens. There are many soggy or poorly drained areas containing tussocks of sedge and various marsh grasses. For the most part, it is dry rather than the ubiquitous spongy wetness characteristic of the Alaskan tundra. It is best described as a tightly woven mat of lichens and mosses on a thin layer of soil that supports an assortment of dwarf plants such as birch and willow trees, crow berries, blue berries, cranberries and mushrooms. Labrador tea and caribou lichen are present but sparse. Cottongrass often dots the wet areas and makes for an excellent backdrop if you can catch an animal grazing in the shallows. Inland, however, the landscape is riddled with small “kettle” lakes set amongst the many tributaries that feed the Leaf and Larch Rivers. Caribou lichen is much more prominent and lush, creating a soft carpet of vegetation that sustains the herds throughout their winter migration to the southern boreal forests or taiga. The dwarf birch and willow is much larger than that found on the coast and is interspersed amongst very stunted strands of black spruce and larch. Pods of White Spruce or “Crumholtz” complete what is a sparsely forested atmosphere. Cranberries abound and Sweet Gale can be found that makes an excellent tea. The Caribou follow well worn migration trails over the granite outcrops, through the wet areas and along “eskers” or gravel ridge lines that were formed from glacially derived deposits.

Walking is relatively easy in both areas although we were overwhelmed by a vast stillness that gripped our first few days. Hoards of black flies often accompanied our every movement and would abate only with a moderate to brisk wind. An upper body bug net is essential as bites can be a significant irritation. It is a harsh and unforgiving environment that leaves you in awe of the fauna and flora that have adapted to survive there.

Walking to find the herds or awaiting a river crossing often yields other wildlife opportunities such as Arctic Fox, Short-Tailed Weasel, Snowshoe Rabbit and both Rock and Willow Ptarmigan. We wore water resistant footwear and layered clothing and preferred to backpack our equipment to location and setup on site. We used a fixed 600mm lens with both 1.4 and 2 times extenders. Our bag also included a 100-400mm zoom lens for relatively close encounters. For landscapes we used an EF 24-105mm f/4 L IS USM lens that was interchanged with the lens we used for the aurora depending on composition criteria.

Musk-ox must be stalked quietly down wind as they see few humans and are constantly on the lookout for wolves and bears. Positioning for light is therefore difficult and you are more often than not left to work with what you are given. It’s not uncommon to trek seven miles each day in search of a herd. Caribou, on the other hand, utilize well worn trails and must be photographed from a concealed location so as not to force any deviation from their migration route that might cause stress or an unnecessary expenditure in energy that would tire the animal. It’s also a waiting game. The Caribou herds tend to walk into the wind to ward off bugs. Predicting their movement and location over what is thousands of square miles of terrain is difficult. Being in the right place requires a fair amount of serendipity and getting a compelling image needs time and patience. The conditions we experienced were less than stellar, especially inland where high winds and rain left us sitting in camp most days trying to remain dry and warm. When the weather did abate, we saw few Caribou and only at a distance.

This is not an area we can recommend as a photography paradise unless you are prepared to spend several weeks waiting for the right conditions to prevail. It has all the ear marks of producing some exciting results but is definitely weather, bug and animal dependent. As this is also a remote area, you may have to put up with some very primitive accommodations. To see how we fared on our sub-arctic excursion, review Gallery 93.