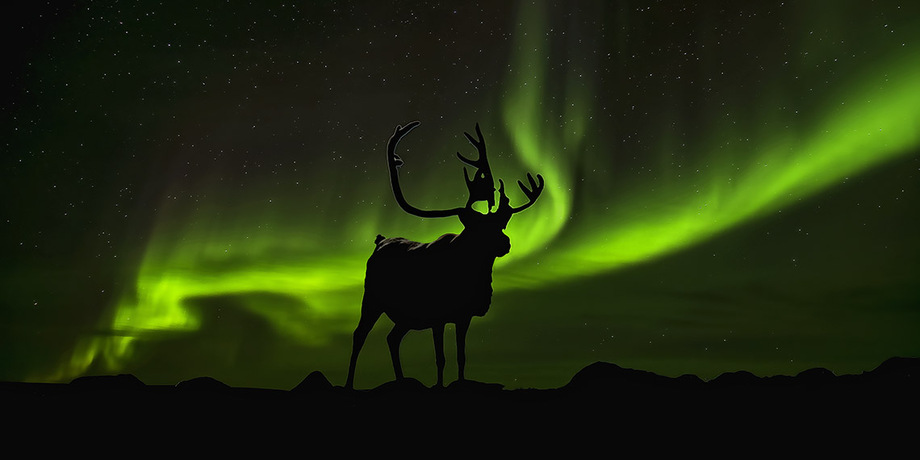 There are many places in the Canadian arctic to witness the migration of Barren Land Caribou. Perhaps the best is at Ennadai Lake in the Kivalliq Region of present-day Nunavut, approximately 700 kilometers northeast of Yellowknife. Located on the fringe of the tree line, sparse black spruce and tamarack abound, stunted by harsh winds and dry summers. The area is the departure and terminus of the annual migration of the Qamanirjuaq herd whose numbers are estimated to exceed 300,000.

The consensus is that the migration in this area is best viewed in March or early April as the caribou travel in large numbers east to the coast of Hudson’s Bay, then north to their calving grounds. Alternatively, late summer and early fall can also be good but the Caribou return in smaller groups to their winter range in the tree line. As mentioned above, spring herds are more concentrated and the late winter conditions make great backdrops. The area is flat and easy to traverse but requires boat travel in the fall to spot migrating groups. As you would expect, herd movement attracts predatory wildlife, including Wolves, Grizzly Bear, Black Bear and Wolverines.

We decided on an early September visit, staying at the Arctic Haven Wilderness Lodge. We hoped this would afford us the opportunity to not only photograph Caribou in dramatic fall colors but also the aurora borealis on clear evenings.

We knew there would be little bird life in the area at this time of year. However, we did encounter Gray Jay, Harris’s and White-Crowned Sparrow around the lodge. We were also surprised to see a Red Squirrel that we felt shouldn’t have been this far north. They are apparently abundant but at the limit of their North American range. The dominant fall colors of crimson red (bear berries), vibrant yellow and orange (dwarf birch and larch), emerald green (crow berries) and light gray ground cover (caribou lichen) didn’t disappoint us. Black “witches hair” dangled from the spruce trees, adding further character to what is a harsh landscape.

You should be aware that controlling light variation can be problematic. Photographing bracketed High Dynamic Range images is challenging as wind of varying intensity often hounds your every step.

As mentioned above, the fall return is widespread and much less concentrated than in the spring making it difficult to locate animals. As you can also appreciate, photographing from a boat even on a calm day is a tough business. Success requires at least a 600mm lens coupled with a 2X teleconverter and a camera body that can autofocus this lens arrangement. When a lone individual or small group is located, you’ll be left working with what you’re given as positioning for light and background is often not an option.

As you can appreciate, the tundra is thousands of square kilometers dotted at this time of year with small to large water bodies where land passage spans rocky to spongy wet terrain or shallows where the animals can ford. Finding Caribou in the fall is often like locating the proverbial needle in a haystack. The migration is also weather dependant and if warm can occur much later than expected. Nonetheless, there is never a lack of scheduled, interesting activities with experienced and knowledgeable guides. We enjoyed hiking the various terrains, especially the eskers and ridges that coughed up spectacular tundra panoramas. The lodge accommodations and meals were first class. In addition, the aurora was nothing less than phenomenal and could be easily captured using the lake or surrounding lodge structures as foreground. To see how we fared, you can view our images in Gallery 96.