Yosemite is best photographed in the fall and winter months, especially when the weather cooperates with good cloud structure and fresh snowfall. As the park faces west, the light is generally better during late afternoon and evening. Don’t let this deter you from getting an early start especially after an early snowfall, targeting locations on the Northside Drive and Tunnel View. It’s also a great park for night photography at Glacier Point and El Cap Meadows although air traffic can become problematic. Given that weather and time of day dictates location choice, it’s difficult for a first time visitor to know just where to begin. A good option is to book a photo tour tailored to the time of year you plan to visit (of the many options available, a good first choice is Yosemite Photo Workshops. November fall colors would be our primary focus. Also, the main roads (Glacier Point and Tioga) are still open, providing full access to the parks main attractions. It was also an opportunity to take in what remains of the gold mining town at Bodie State Historic Park in the Eastern Sierra. The mountains house many mining ruins and we hoped to find other well known sites on the back roads that honeycomb the area. We also planned a visit to the picturesque calcium carbonate spires at the Mono Lake Tufa State Natural Reserve.. This latter location is located east of Yosemite in a basin between the Sierra Nevada, White and Excelsior Mountains. It is a great location for photography both prior and after sunrise and sunset, especially for longer exposures taken while painting the formations with a flashlight. The best formations are located in the South Reserve (from the parking lot take the paved path and boardwalk to the beach and go right). You can see how we fared in Gallery 77 and read about the finer points of each location below.

We started our trip at Bodie State Historic Park near Bridgeport, California. This location can be a bit disappointing from a photography perspective as the natural setting of the buildings within the town site is now less than five percent of its peak, leaving what you would think is little of the ambiance that a late 1800’s settlement of ten thousand people with sixty-five saloons would engender if left in either a pristine or slightly decaying condition. Unfortunately the town was subject to a fair amount of looting prior to the State claiming it as a historic site. The brochure “weasel words” hint at a current “arrested state,” simply meaning that repairs are underway to what is left of leaking roof tops and sagging floors to give the place a look that hopefully mirrors the original layout. The interior of most buildings is closed. Those that are open have restricted viewpoints secured by large wire mesh (if you pathologically feel the need to heighten your photography experience, for a mere $400 plus $100 per photographer you can gain entrance to any building between opening and noon on most days provided you book ahead). Despite the restrictions and the attempt to waylay the vagaries of time, Bodie still houses enough natural elements that positioning can eliminate most of the new look and lack of access to make the experience worthwhile. It’s a morning and afternoon location where positioning is obvious given the light. A 16-35mm or 24-105mm lens is adequate for most images. We did two mornings and one afternoon visit over three days, waiting for character clouds to hopefully give our images some zip. We chose late October to avoid the crowds but it’s a crap shoot at this time of year as weather can change dramatically (almost hourly) and you can find yourself locked out as the road closes at the first hint of snow. This extends to Tioga Pass at the eastern entrance to Yosemite National Park where early snow can force closure and leave you few options getting to the western entrance other than a lengthy drive around the park.

Fortunately the Mono Lake tufa formations at the South Reserve near Lee Vining are nearby, affording you the opportunity to allocate your time between the two locations to take advantage of the prevailing weather conditions. This location can be a truly phenomenal photography experience, especially if the wind abates (which isn’t often). We were lucky one afternoon when the calm water created spectacular reflections. The clouds here can also produce some tremendous opportunities, especially at sunrise and sunset. Again, luck was with us one morning and evening when the suns red glow reflected beautifully on the clouds. If you encounter this at sunset, it’s important to note that you’ll have to wait roughly twenty minutes after the sun sets for the effect to fully materialize. We walked the beach for roughly a mile south of Navy Beach and found several more formations that were in a colorful setting as the grass had turned a bright golden hue with the approach of winter. We also took the boardwalk at the Old Marina but found the tufa formations were too low and difficult to frame in any compelling way.

While in the area, we took the opportunity to scout fall locations along both the June Lake and Mammoth Scenic Loops. Although there were several good aspen groves sporting snow clad mountain backdrops along the north end of the former route, there was little else that caught our eye. Along the latter route, we failed to reach the Devils Postpile National Monument due to snow conditions. We did, however, find a good sunrise aspen location only a short distance up Highway 120 opposite the Lower Lee Vining Campground. Otherwise, the best photography opportunities in this area were definitely at the South Reserve. We did take another side trip of interest to the Chemung Mine. It’s a morning location and a tremendous sunrise opportunity. We found the mine access to be on a good dirt road but a definite 4X4 route if you decide to continue on to Masonic or explore the surrounding hills. Take Highway 182 north at Bridgeport and turn right on Masonic Road. The mine is approximately four miles from the junction. As mentioned above, the road is good to the mine but deteriorates as you continue on to the ruins at Masonic. It’s also easy to get lost as there is a honeycomb of side roads throughout the area.

We entered Yosemite National Park through the east entrance. The Tioga Pass route is a narrow, often rock strewn road that meanders through dense forests, offering little in the way of compelling photography opportunities. One exception is Siesta Lake, a small, calm, roadside gem that produced some interesting reflections of the forest shoreline. Our real adventure started at the Merced River next to the Lodge at the Falls. Here we worked the morning light as it penetrated the golden hue of the fall aspens. Sunset found us at Glacier Point where we photographed the last rays on the Half Dome, staying on to try our hand at capturing star trails and doing some flashlight painting on the trees with the Milky Way as a backdrop. This can be a troublesome location for star trail photography as there is a considerable amount of air traffic, both planes and spinning satellites. However, flashlight painting using trees as foreground objects can be a lot of fun as the sky on a clear night is riddled with brilliant stars. 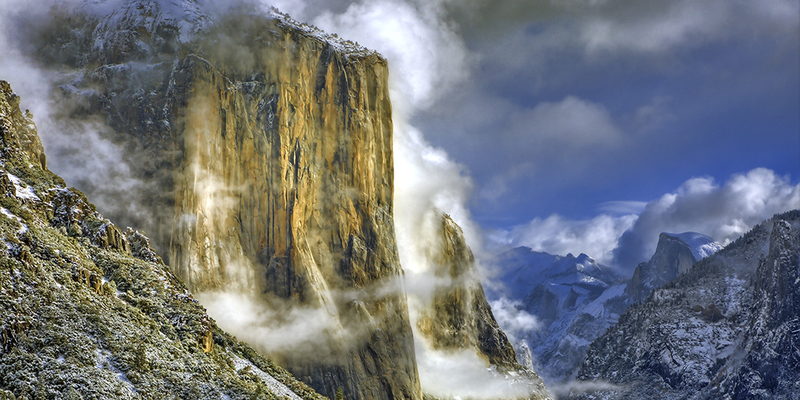 If good real estate is all about location, then Yosemite is all about weather. It can change rapidly and photography is best tackled by positioning and waiting for the climate to produce the wow factor you are looking for. During a five day period in early November we experienced clear sky, placid water reflections, fog wind, storm clouds and snow. There is no better location to experience this than Tunnel View. Capturing the fall colors is best done by working the Merced River along the north and south river drives. Here you will have to stop and look for scenes, especially those with water reflections. Try the Valley View of El Capitan at the bend in the river just before the Pohono Bridge. If this is your first visit, the above area can cough up some pretty good vistas over a day or two of volatile weather and it’s easy to cover if you take your time. The sites aren’t hard to find but looking for photographers parking roadside is a dead giveaway that the river location is probably worth exploring. The key to getting good images at this time of year is to target the good valley locations up to Tunnel View and cycle through each three or four times during the day looking for good opportunities. It’s a small area so driving isn’t onerous and the weather change can be dramatic, especially after an early snowfall. Work quickly though, as the melt can be occur rapidly.

You should be aware that carrying chains is mandatory at this time of year. Also, and somewhat disappointing, there are no waterfalls as the spring snow melt has long since dried up. Vernal Falls was little more than a garden hose and the Upper and Lower Yosemite falls were nonexistent.